Twenty-one artists sued the owner of 5Pointz, a New York site that was an international graffiti mecca beginning in the 1990s

A New York judge has awarded $6.7m to graffiti artists who sued after their work was destroyed on buildings torn down to make room for luxury apartments in Queens.

The federal judge Frederic Block in Brooklyn noted Monday there was no remorse from the owner of the warehouse buildings. 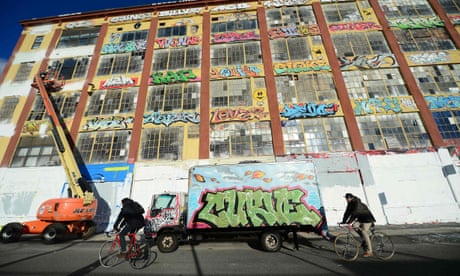 Twenty-one aerosol artists had sued the owner of a site in Long Island City known as 5Pointz. Their graffiti was ruined with a surprise overnight whitewash of the building on the orders of the owner in 2013, and the buildings were torn down a year later.

The ruling followed a three-week trial in November.

The judge said he would not have assessed so much in damages if the owner had awaited his permits and demolished the art 10 months later than he did. The same judge had presided over proceedings in 2013 when he had warned that artists that he had to follow the law regarding private property and said: “The building, unfortunately, is going to have to come down.”

Photos of works on display, including a piece by the renowned graffiti artist Lady Pink, had been projected in the courtroom during that earlier proceeding, as the art expert Daniel Simmons testified to the “stature” of many of the artists displayed, and the value of the work at 5Pointz as a history of street art and, especially, art in relation to hip-hop music.

5Pointz had been an international graffiti mecca since the 1990s, after previous arrangements allowed street artists legally to make paintings on the giant building and, for a time, allowed artists to live and work cheaply inside. Tourists came from around the world to see the spectacle and New Yorkers saw the towering graffiti art daily from the elevated tracks of the subway train.

Banksy, the mysterious but prolific British street artist, made a plea to save 5Pointz in 2013 after a stint making art displays all over the New York City during an art residency he called Better Out Than In.

The plea was in vain and artists were in tears when 5Pointz was lost.