Investment in windfarms will fall off a “cliff edge” over the next three years and put the UK’s greenhouse gas reduction targets at risk, a thinktank has found.

More than £1bn of future investment in renewable energy projects disappeared over the course of 2016, the Green Alliance found when it analysed the government’s latest pipeline of major infrastructure plans.

Investment in wind, solar, biomass power and waste-to-energy projects will decline by 95% between 2017 and 2020, it added. 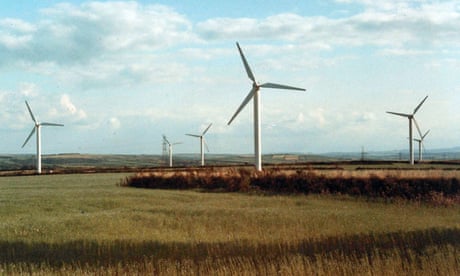 While a slowdown in green energy investment had been expected after ministers cut several subsidy schemes over the last 18 months, the figures lay bare the dramatic extent of the decline.

“This cliff edge needs to be avoided if the UK is to meet its world leading carbon budgets and Paris agreement pledge,” Green Alliance said in its analysis.

Shortly after the EU referendum, the government committed to cutting carbon emissions by 57% by 2030 on 1990 levels, but has so far failed to spell out how it will support low-carbon energy, such as offshore windfarms, beyond 2020.

“Renewables will be cheaper than new fossil power stations by 2025 at the latest if we allow companies to build, learn, and cut their costs. But the government has been holding back the final bit of support needed to make renewables subsidy free. It’s also blocked the cheapest renewables from being built,” said Dustin Benton, acting deputy director at Green Alliance, referring to the government ending subsidies for onshore wind. “Unsurprisingly, the result is a 95% fall in investment.”

The thinktank’s analysis found that high carbon infrastructure, which it defines as fossil fuel power stations, airports and road building, was faring little better. For the first time since 2012, high carbon investment had stopped growing, and will be down by two-thirds by 2020.

RenewableUK, which represents the wind power industry, said the government needed to set out its vision on energy to enable investor confidence.

Emma Pinchbeck, the group’s executive director, said: “The energy sector is changing. The infrastructure pipeline shows that the private sector understands the smart money is on the renewables industry – that is why they are moving from high carbon assets to low carbon ones.”

But the infrastructure pipeline showed the government had managed to cut £2bn from the cost of decommissioning old nuclear power plants. The thinktank said that was good news as it could free up money to spend on encouraging people to switch to lower carbon heating, which ministers have admitted is progressing slowly.

A government spokesman said: “We are fully committed to a low-carbon future and the Office for Budget Responsibility recently projected that £8.4bn will be spent on renewable projects in the UK in 2020/21.

“We are one of the best countries in the world at tackling climate change with £52bn invested in renewable projects in the UK since 2010. Last November we reaffirmed our commitment to spend £730m of annual support on renewable electricity projects over this parliament.”