Former shop worker ousts Yahya Jammeh on promise of change, transforming him into a national hero in only a few weeks

The Gambia’s new president, Adama Barrow, is a real-estate agent and former Argos security guard who wooed voters with promises of a new start for one of Africa’s poorest countries.

The 51-year-old was born in a riverside village far inland, on the eve of Gambian independence. He won a scholarship to high school in the capital, Banjul, then rose through the ranks of local firms.

He was working as sales manager at a gas company when he decided to travel to London to study and save up funds to start his own company.

He is proud of an experience that included working as a security guard in an Argos store in Holloway Road, north London.

“Life is a process, and the UK helped helped me to become the person I am today. Working 15 hours a day builds a man,” Barrow told Le Monde during the election campaign.

While in London he developed a passion for Arsenal that the self-confessed workaholic describes as one of his few indulgences.

Modest and softly spoken, he still keeps punishing hours, even after building up his own business. “I work 12, 13, 14 hours a day,” he told Agence France-Presse before the election.

He has two wives and five children, aged between two and 18. A devout Muslim, he says faith guides his life and politics. “If you are a religious man it always influences you.” 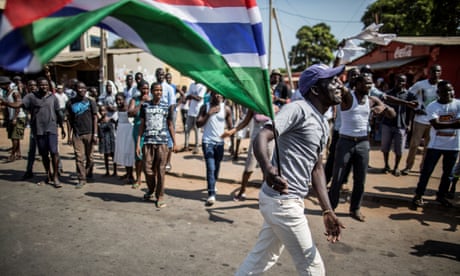 He touted his business experience and lack of political baggage as assets in a country that has had only two leaders since independence.

Voters embraced his promise of change, transforming him from private citizen to national hero in just a few weeks.

On Friday, the Guardian spoke to three staff members who have worked at the Argos branch on Holloway Road for 15 years or longer who could not remember the now president-elect of Gambia, but local shoppers were dazzled by his rise.

Abdul Yaseen, 45, who has been shopping at the store for 20 years, said: “It seems hard to believe that he could go from that job to president. Fair play to him.”