When Labour’s John McDonnell stood up to respond to the autumn statement on Wednesday, half his party’s MPs started noodling on their phones behind him. Was it the height of rudeness – or all part of a modern-day MP’s duties?

They filed into the House of Commons chamber to learn what Brexit means for the economy, and filed out to be shamed the next morning by newspaper picture editors armed with yellow pens. In one photograph, half of the 42 Labour MPs sitting behind John McDonnell can be seen immersed in their mobile phones while the shadow chancellor responds to the autumn statement.

“Isn’t that awful?” asked Judith Woods in the Daily Telegraph, comparing the “rude” MPs to millennials unable to resist the lure of their devices during pub quizzes. “Isn’t this addiction steering dangerously close to out-and-out junkiedom?” she added, gamely offering to “restore Britain’s manners to their factory settings”.

McDonnell was sanguine about the perceived digital snub. “It doesn’t look good, but that’s what happens,” he told ITV’s Good Morning Britain. But should it happen? Beyond the obvious danger that phones can pose, not least on the road, should we take a stand against tapping in the workplace?

Labour MP Sarah Champion, one of those pictured, makes a stirring defence of connected politicians. “When I look at that picture, I see a lot of MPs trying to live-stream what’s going on to make it more accessible,” she says. “They’re not playing Candy Crush – or at least this one certainly isn’t.”

Seven minutes after McDonnell stood up to respond to Philip Hammond, Champion tweeted about the chancellor’s failure to address the gender pay gap. She then retweeted shadow health secretary Jonathan Ashworth, another of the MPs in the picture, who was sharing his dismayabout the absence of the NHS in the autumn statement.

“Tweeting is a direct way for me to get my messages out to people,” adds Champion, who has more than 20,000 followers, many of whom she represents. “I could put out a press statement hours afterwards, but it may not be picked up. This way I can commentate live, and if I’ve got a juicy story on Twitter, within minutes I have journalists calling me for more information.”

Outside parliament, rules, unspoken or otherwise, vary. Debrett’s, the arbiter of etiquette for centuries, is strict on the matter. “In a work context, mobiles can be seen as disruptive, self-involved and anti the corporate culture,” its Netiquette Pocket Book says, adding: “The cardinal rule is always to switch your phone off before you go into a meeting.”

Three-quarters of the respondents to a 2013 survey of business people by the University of Southern California said that it was inappropriate to read phones during meetings. But Monideepa Tarafdar, a professor of management at Lancaster University, says bosses are adapting to modern demands for always-on communication. “There are times in meetings when not everyone is talking, and if something work-related can be quickly finished off with a little email, people can do that,” she says. “I think people are sensible about when interruptions might affect productivity.”

Champion says she wouldn’t use her phone for anything other than calls were she not an MP, but insists social media offers a vital, two-way channel. “I also get alerted to campaigns and casework,” she adds. “And MPs are expensive. Do you want us just listening for hours, or to be able to work and talk to people and reflect debate? That’s a much better use of my time.” 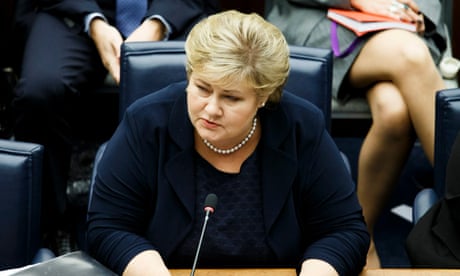 House of Commons authorities have permitted the use of phones in the chamber since 2007, but emails on Blackberries were the only distraction then. In May, the Speaker John Bercow burned Jeremy Hunt for “fiddling ostentatiously” with his phone during a debate, calling him “rank discourteous” for “impairing parliamentary decorum”. David Cameron banned phones from cabinet meetings in 2010, and last year had to remind Michael Gove of this when the minister’s ringtone gave him away. Theresa May has expanded the ban to include Apple Watches, reportedly over concerns that they might be hacked by spies. In 2014, Conservative MP Nigel Mills apologised after being caught playing Candy Crush Saga during a meeting of the work and pensions committee.

But Labour MPs – or anyone else – feeling unfairly rebuked can seek solidarity with the Norwegian prime minister Erna Solberg, no less, who was caught playing Pokémon Go during a parliamentary debate last month. It wasn’t the first incidence of Pokémon distraction in the house: Trine Skei Grande, the Liberal party leader who had previously been rumbled, responded on Twitter (naturally). “We ladies can do two things at the same time you know,” she wrote, including a winky-face emoji for good measure.

Pauline Brimblecombe, 62, GP and prison doctor in Cambridgeshire: Some practices have “no mobile phone” signs, but nobody pays any attention of course. I’ve had patients answer non-urgent calls in consultations, which is rather irritating, and I’ve also known patients to complain about doctors using phones. It’s part of life now. But not in prison, where phones are banned. I leave mine in the car. In a way, it’s quite nice – an unlikely oasis where I can go and have an uninterrupted day.

Sarah Champion, 47, Labour MP for Rotherham: If I’m awake, my phone is on, but it never comes into the bedroom, and I see it as a piece of kit for me to do my job. It’s fundamental for me to able to communicate directly with people. I’m on Twitter, which I do myself, and I’ve got Facebook, though that tends to be more press release-type stuff. I haven’t got Snapchat – I’m old, remember. And I don’t have my parliamentary inbox on my phone, because that would take up every minute of my day. On a busy day I can get 200 emails per hour.

Michael Donkor, 30, English teacher in south London: New students get a talk about the importance of not touching phones in lessons. They go a bit crazy at first because they come to a new school expecting all these new freedoms, but they soon get used to it. We’re not supposed to use them either, but occasionally I’ve felt a buzz in my pocket and resisted the urge to check for that email from the mortgage broker. Phones tend to stay put away, even in the staff room. After two hours in the company of young people, you really just want an actual conversation with an adult.