Reforms intended to ban unpaid internships have been blocked after Tory backbenchers and the Government spoke at length against the proposals.

The draft legislation aimed to ensure people in workplace internships are paid the minimum wage rate applicable to their age. 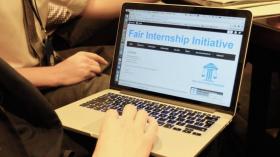 How unpaid interns across Europe are fighting for fair pay

Conservative MP Alec Shelbrooke, who sponsored the legislation, said not paying interns had become the “acceptable face of unpaid labour in modern Britain” and the Government sent the message that “exploiting” young workers is acceptable with more than 20 MPs advertising unpaid roles.

He added that the “volunteer loophole” meant young people were not paid, despite performing tasks similar to part and full-time staff members.

But, the National Minimum Wage (Workplace Internships) Bill was blocked after the debate on Friday was forced to a close after the Government and Tory backbenchers spoke for 4.5 hours in speeches, with some speaking for more than one hour.

Business Minister Margot James talked out the proposals in a 25-minute speech, followed by Tory David Nuttall who spoke for 67 minutes and Tory Philip Davies who spoke for 66 minutes.

Ms James warned the reforms could have “unintended consequences”, including putting financial pressure on firms, which could lead to a reduction of internship roles.

Replying for the Government she said: “While it’s [the Bill] extremely well-intentioned, I do have concerns that it could have unintended consequences that might even undermine existing employment laws and protections.

“Legally the Bill is unnecessary because […] interns are eligible for the national minimum wage if they meet the definition of ‘worker’.

Bob Stewart, Tory MP for Beckenham, said: “It’s clear to me that if an employer wishes to pay an intern they could and they should, if they have the money. But if they have to pay internships then that comes off the bottom line, it’s a cost to the business, and undoubtedly there will be fewer internships.”

Mr Davies, MP for Shipley, told the debate: “(Mr Shelbrooke) says he wants to even up the playing field to make sure that poorer people get the same opportunities that richer people get and take for granted.

Ms James said the Government would ask for unpaid internships to be considered by Matthew Taylor, former policy chief to Tony Blair, as part of its previously announced review into employment practices.

Shadow business minister Gill Furniss said Labour supported the Bill, saying the internship system is “rigged in favour of those who can afford it,” adding “or perhaps better said, whose parents can afford it.”

She added that unpaid internships are “monopolised by the children of the wealthy” while poorer people are “shut out”.

Ben Lyons, co-director of the Intern Aware campaign, said in a statement: “The Government flunked an opportunity to tackle the problem of long-term unpaid internships, which leads to good jobs going to those who can afford to work for free, rather than the brightest and most hard-working.”

Mr Shelbrooke called for the debate to continue on 24 February, however it is unlikely to gain further parliamentary time.