Marc Maron, WTF: ‘It’s not difficult to do a podcast … but it’s hard getting people to listen’

It’s not difficult to do a podcast. What’s hard is getting people to listen to it. I’m not going to mislead anybody, there are a lot of podcasts out there. What anyone has to do to get anyone to listen to it, who knows? I don’t know. Before you were chosen by a network or a label or a comedy club and given an opportunity, here it all rests with you and how you find your way out of the tremendous pile of stuff. That’s the trick. I think that once you start having big ideas about how much money you’re going to make from your podcast, or how you’re going to get this or that out there or what needs to happen and a lot of energy goes into that, it sort of amplifies the possibilities for disappointment. It’s a difficult entrepreneurial venture, but we didn’t go into it because of that. 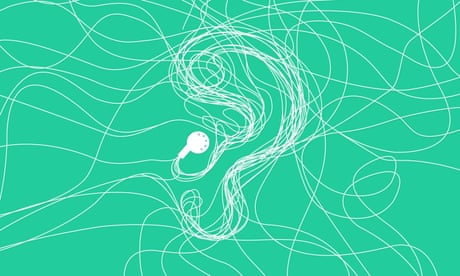 The 50 podcasts you need to hear

Podcasting is a great technology. It’s a medium that anyone can do and you can just throw your hat into the ring. But getting people to it, that is just as hard as anything else you can create and put out in the world. But with podcasting you don’t have much to lose. Just temper your expectations and try to create what you want to create. Figure out how to get people to hear it and like it. Don’t think that you necessarily have the million-dollar idea or that everything is going to turn around. Just do the best that you can do and try to realize your vision and see if other people like it. If they don’t, that’s on them. And if that bothers you, well, you can just keep trying to get people to like you, I guess, but that’s never been my approach.

Lauren Lapkus, With Special Guest: ‘The secret to podcast success is making it fun for yourself’

One of the perks of my show’s format is that I don’t have to prepare in advance. My guest is the host, and they determine the theme of the show and the character I’ll play. They don’t tell me anything until we’re already recording, so the show is fully improvised. But I do 10 hours of vocal warm-ups before each show and refuse to record until I’ve done a thousand crunches in total silence. Because the guest is playing the role of the host, it’s important for them to feel as comfortable as possible – choosing a theme and character for themselves that they enjoy makes it much easier to jump right into the conversation. I’ve never felt like anyone did a bad job at that, though! I’ve been lucky to have a ton of amazing performers on my show.

The secret to podcast success is sticking with it and making it fun for yourself. The podcasts that keep my attention are those where I can feel the hosts and guests are enjoying themselves or are really passionate about the subject matter. The connective tissue between storytelling, advice and comedy is passion.

Aaron Mahnke, Lore: ‘I spend 30 to 40 hours preparing each episode’

There’s no secret or magic pill to ensure a podcast’s success, but there are some best practices. I think all successful podcast do one thing: they deliver consistent quality content that exceeds the listeners’ expectations. I spend 30 to 40 hours preparing each episode – that includes research, reading, planning, writing, recording, producing and launching the episode. The rest of my time is spent on the television show, press interviews, live shows, bookkeeping and admin, and fan email. I get hundreds of those each month. I started Lore by accident, and have just been trying to figure it out as I go. The fans are amazing, though, and they’re like cheerleaders. This is a non-stop job, and it’s growing every day, so having them along for the ride to cheer me on is powerful.

There’s one thing that makes me subscribe to a podcast: quality. I give a lot of shows a try. A friend will recommend a show, or I’ll see one highlighted in an article online, and I’ll click the link. So I’m happy to try things out. But if it’s not good, I won’t come back. My time is too limited to listen to mediocre content when there’s so much good stuff out there.

Reggie Ossé, The Combat Jack Show: ‘My advice? Just do it’

For anyone who wants to start a podcast, my advice is simple: just do it. Don’t be self-conscious. Don’t worry about whether you sound like this person or that person or what level of expertise you’re on – just do it. Just jump in. It’s really important to train your audience to expect something that is going to be delivered on schedule. If you have a weekly show, deliver it weekly. I am very meticulous with regard to my preparation before interviews. I spend a lot of hours researching and finding just random interviews and anything random that I can find about my guests to bring a different texture, a different element to the interview. I want to make my interview with my guests really unique. It’s all about preparation.

Modest expectations are a very important starting point, especially with conversation-based podcasts. People have a really inaccurate understanding of how much work they are, both from a content point and especially from a production standpoint. People don’t understand that people who produce high-quality chat shows spend a lot of time editing and cutting them. Don’t be in the position of thinking that for the low, low price of a couple of hours of work a week you can make something that is going to make something that sounds like it came out of BuzzFeed.

Now Hear This Podcast Festival will take place in Anaheim, California, from 28-30 October.
Did you know The Guardian has been making podcasts for a decade now? Why not check out our range of podcasts from Football Weekly with James Richardson to our sex and relationships podcast series Close Encounters.